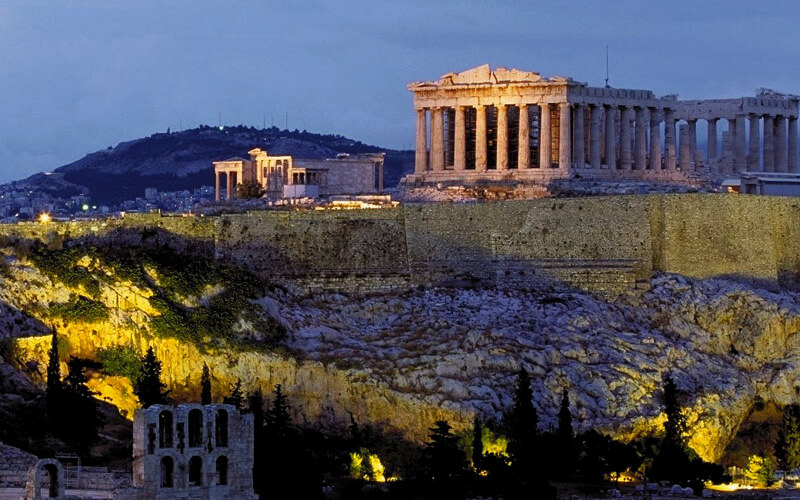 Despite Athens being a metropolis with millions of people - a city that never sleeps - in August, it feels tranquil and quaint. As many Athenians head out of the city on summer holiday, in August the city becomes less crowded; it is a great opportunity for locals and visitors to enjoy some sightseeing, visit monuments and check out spots around the city that are typically crowded. If you happen to be in Athens on August 15th then head to the Acropolis to enjoy utter peace and tranquility.

There is evidence that the Acropolis hill was inhabited as far back as the 7 millennium BC. In 570 BC, the Old Temple of Athena, dedicated to Athena Polias, was erected and around 500 BC, an older Parthenon was built. When the Persians invaded the city in 480 BC, the building and practically everything else on the rock was destroyed. It was Pericles who, between 450 to 420 BC, coordinated the reconstruction of the site. Phidias created the massive gold and ivory sculpture of the Greek goddess Athena and was responsible for the reconstruction; while in 447 BC, Ictinus and Callicrates built the Parthenon. In 421 BC, the construction of the elegant temple of Erechtheion in Pentelic marble began. The eastern part of the temple was dedicated to Athena Polias, while the western part served the cult of the king Poseidon-Erechtheus; this temple was supported by huge female figures known as Caryatids. Between 427 and 424 BC the small temple of Athena Nike was built and in 427 BC, Pericles built the Propylaea, the entrance to the temple. In August you can admire the Parthenon and experience Ancient Athens’ history wonderfully undisturbed.

August’s full moon will occur on August 15th and seeing the Acropolis rock bathed in ample moonlight is a spectacle not to be missed. The Ministry of Culture has organized numerous events at and around the Acropolis on this day; the ancient site and museum will stay open for 24 hours. Philopappou Hill, Nymphon Hill, and Pnyka Hill are all ideal spots to gaze at the Acropolis and savor the jaw-dropping views.